The summer heat is turned up at 11 Link malls as trial games and the largest Beyblade and Bakugan match tour come to town between 8 July and 18 August, bringing together elite players to take their best shot at the Link Trophy in front of their fans. 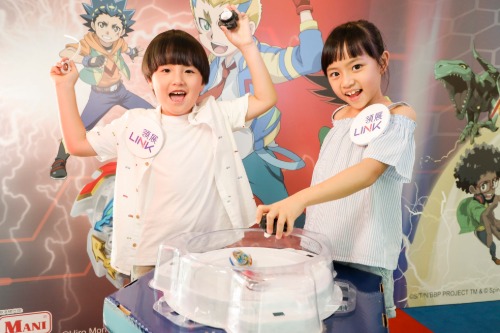 Slated to open on 20 July and to run for five weekends, the Link Trophy calls on top Beybladers and Bakugan players to vie for the accolade in front of their fans!

Sample a high-octane array of Beyblade Burst and Bakugan toys and rise to the challenge to win an Event Exclusive Folder. A limited daily quota applies, while stock lasts.

During the campaign, customers with spending totalling HK$1,500 or above in a 7-day period at 11 selected Link malls and fresh markets using an eligible electronic payment method can each redeem a maximum of 5 machine-printed original receipts from different merchants for a Link x Beyblade Burst Carryall. Gifts are available in limited quantities while stock lasts.

Spectacular and stirring competitions reign this summer holiday as 11 Link malls collaborate between 8 July and 18 August to organise the “Link x Beyblade Burst G + Bakugan Battle Planet” Match Tour, where top Beybladers vie for the inaugural Link Trophy in front of their fans. As part of the 20th anniversary celebration for the Beyblade Burst, coupled with the much-anticipated return of Bakugan, the event will feature the Hong Kong debut of two enormous Beyblade Burst G and Bakugan Battle Planet-themed installations, offering an Insta-ready scene for fans to take memorable selfies!

Cream of the Crop Battle It Out for the Inaugural Link Trophy
The tension will be through the roof starting on 20 July when a nine-match qualifier is organised across five weekends to give away prizes to outstanding players who earn the final berths for the match to decide the Link Trophy, which will be held on 18 August at Lok Fu Place. Those who make the medal podium will be awarded gear representing the highest honours in the ranks, namely gold, silver and bronze limited edition Beylaunchers. The tournament is open to all aspiring Beybladers aged 6-13. For more details, stay tuned to the official Facebook pages of Beyblade Hong Kong Tournament Association and BakuganHK. Interested players can register online.

In the run-up to the tournament, young hopefuls can gear up for fierce face-offs at dedicated in-mall trial arenas filled with Beyblade Burst and Bakugan battle sets. On the days of the Beyblade Burst qualifiers, parents and kids will be entertained by an exciting array of fixtures, including a Partner Match, 2-Team Match and Parent-Child Tournament. Meanwhile, the Bakugan qualifier will feature a Bakugan Challenge and Bakugan 3-on-3 Battle Tutorial with demonstrations by judges and players.

Limited Goodies @ Pop-up Stores
On competition days, contenders can gear up at Beyblade Burst and Bakugan pop-up stores, where bestselling toys abound along with new releases and, most importantly, the rare and exclusive transparent Bakugan!

Link x Beyblade Burst Carryall
In celebration of the 20th anniversary of Beyblade Burst, Link will equip Beybladers with the heavy-duty Link x Beyblade Burst Carryall that holds all their battle gear. Customers with spending totalling HK$1,500 or above in a 7-day period at 11 selected malls and fresh markets using eligible electronic payment methods can each receive a convenient carryall for free by redeeming a maximum of 5 machine-printed original receipts issued by different merchants. The carryall is available exclusively at Link’s malls in limited quantities while stock lasts.

Up Your Beyblade Skills Using STEM Knowledge, and Learn Winning Tips from STEM Sir
Meanwhile, STEM Sir will continue to promote the “go STEM and go smart” spirit in a workshop that will incorporate STEM knowledge into a set of winning manoeuvers capitalising on the properties of the famous Beyblade tops and battle balls.

Terms and conditions apply. The programme is subject to change without prior notice.